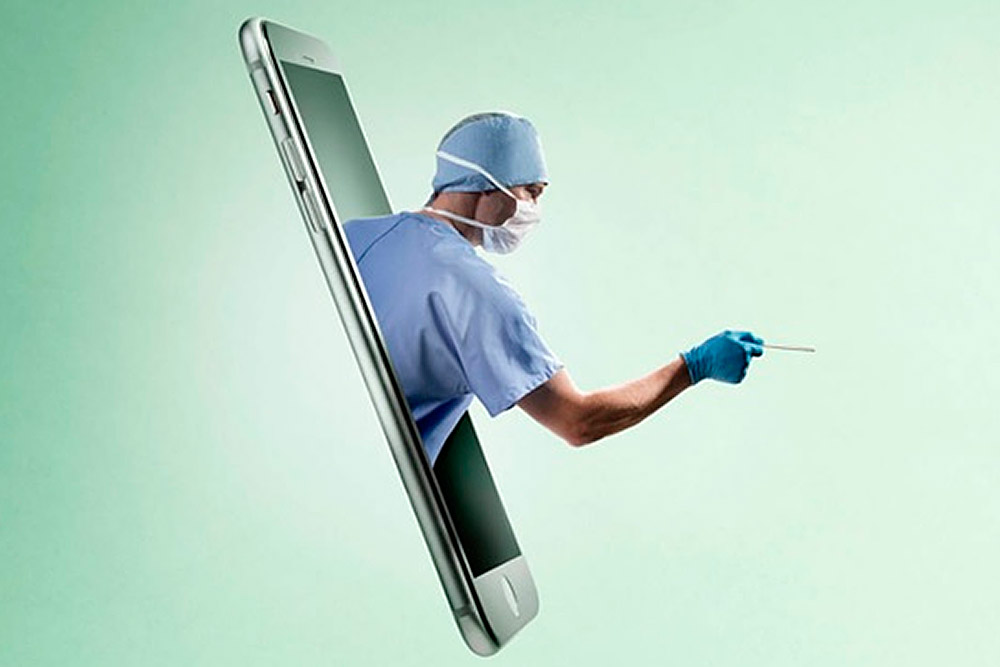 After years of big promises, telemedicine is finally living up to its potential.

Driven by faster internet connections, ubiquitous smartphones and changing insurance standards, more health providers are turning to electronic communications to do their jobs—and it’s upending the delivery of health care.

Doctors are linking up with patients by phone, email and webcam. They’re also consulting with each other electronically—sometimes to make split-second decisions on heart attacks and strokes. Patients, meanwhile, are using new devices to relay their blood pressure, heart rate and other vital signs to their doctors so they can manage chronic conditions at home.

Telemedicine also allows for better care in places where medical expertise is hard to come by.

Five to 10 times a day, Doctors Without Borders relays questions about tough cases from its physicians in Niger, South Sudan and elsewhere to its network of 280 experts around the world, and back again via the internet.

In the woods outside St. Louis, shifts of doctors and nurses work around the clock in Mercy health system’s new Virtual Care Center—a “hospital without beds” that provides remote support for intensive-care units, emergency rooms and other programs in 38 smaller hospitals from North Carolina to Oklahoma. Many of them don’t have a physician on-site 24/7.

In the TeleICU section, critical-care doctors sit at oversize video monitors that continually collect data on every far-flung ICU patient and can spot signs of imminent trouble. If a patient needs attention, Mercy physicians can zoom in via two-way camera—close enough to read the tiny print on an IV bag.

“It’s almost like being at the bedside—I can’t shock a patient [restart his heart with electrical paddles], but I can give an order to the nurses there,” says Vinaya Sermadevi, a critical-care specialist.

In the past year, ICUs monitored by Mercy specialists have seen a 35% decrease in patients’ average length of stay and 30% fewer deaths than anticipated. “That translates to 1,000 people who were expected to die who got to go home instead,” says Randy Moore, president of Mercy Virtual.

As a measure of how rapidly telemedicine is spreading, consider: More than 15 million Americans received some kind of medical care remotely last year, according to the American Telemedicine Association, a trade group, which expects those numbers to grow by 30% this year.

None of this is to say that telemedicine has found its way into all corners of medicine. A recent survey of 500 tech-savvy consumers by HealthMine found that 39% hadn’t heard of telemedicine, and of those who haven’t used it, 42% said they preferred in-person doctor visits. In a poll of 1,500 family physicians, only 15% had used it in their practices—but 90% said they would it if were appropriately reimbursed.

What’s more, for all the rapid growth, significant questions and challenges remain. Rules defining and regulating telemedicine differ widely from state to state and are constantly evolving. Physicians groups are issuing different guidelines about what care they consider appropriate to deliver in what forum.

Some critics also question whether the quality of care is keeping up with the rapid expansion of telemedicine. And there’s the question of what services physicians should be paid for: Insurance coverage varies from health plan to health plan, and a big federal plans covers only a narrow range of services.

Telemedicine’s future will depend on how—and whether—regulators, providers, payers and patients can address these challenges. Here’s a closer look at some of these issues:

Do patients trade quality for convenience?

The fastest-growing services in telemedicine connect consumers with clinicians they’ve never met for one-time phone, video or email visits—on-demand, 24/7. Typically, these are for nonemergency issues such as colds, flu, earaches and skin rashes, and they cost around $45, compared with approximately $100 at a doctor’s office, $160 at an urgent-care clinic or $750 and up at an emergency room.

Many health plans and employers have rushed to offer the services and promote them as a convenient way for plan members to get medical care without leaving home or work. Nearly three-quarters of large employers will offer virtual doctor visits as a benefit to employees this year, up from 48% last year.

Web companies such as Teladoc, Doctor on Demand and American Well are expected to host some 1.2 million such virtual doctor visits this year, up 20% from last year, according to the American Telemedicine Association.

But critics worry that such services may be sacrificing quality for convenience. Consulting a random doctor patients will never meet, they say, further fragments the health-care system, and even minor issues such as upper respiratory infections can’t be thoroughly evaluated by a doctor who can’t listen to your heart, culture your throat or feel your swollen glands.

“Telemedicine holds enormous promise, particularly in dermatology, but these sites are just not ready for prime time,” says Jack Resneck, a University of California, San Francisco, dermatologist and the study’s lead author.

The American Telemedicine Association and other organizations have started accreditation programs to identify top-quality telemedicine sites; the association also tells consumers to be wary of sites that sell products.

The American Medical Association this month approved new ethical guidelines for telemedicine, calling for participating doctors to recognize the limitations of such services and ensure that they have sufficient information to make clinical recommendations.

Yet there isn’t always agreement on what the limits of virtual medical exams are. Jason Gorevic, CEO of Teladoc, which went public last year, says its doctors use more than 100 guidelines developed specifically for delivering care remotely, including a five-point scale for determining whether a sore throat is likely due to streptococcus infection that warrants antibiotics. The Centers for Disease Control and Prevention, however, advises clinicians to prescribe antibiotics only for cases confirmed by a rapid test or throat culture.

Who pays for the services?

While employers and health plans have been eager to cover virtual urgent-care visits, insurers have been far less willing to pay for telemedicine when doctors use phone, email or video to consult with existing patients about continuing issues. “It’s very hard to get paid unless you physically see the patient,” says Peter Rasmussen, a neurosurgeon and medical director of distance health at the Cleveland Clinic.

Some 32 states have passed “parity” laws requiring private insurers to reimburse doctors for services delivered remotely if the same service would be covered in person, though not necessarily at the same rate or frequency. Medicare lags further behind. The federal health plan for the elderly covers a small number of telemedicine services—only for beneficiaries in rural areas and only when the services are received in a hospital, doctor’s office or clinic.

Bills to expand Medicare coverage of telemedicine have bipartisan support in Congress. Opponents worry that such expansion would be costly for taxpayers, but proponents say it would save money in the long run—as much as $2 billion over 10 years, according to an estimate by Avalere Health, a consulting firm.

Doctor-to-doctor consultations are also seldom covered by insurers. Health systems such as Mercy, the Mayo Clinic and the Cleveland Clinic that provide oversight and expertise on strokes, intensive-care units and other specialty care to networks of smaller hospitals typically charge those facilities a monthly fee, which generally cannot be charged to patients.

Such arrangements allow small hospitals to provide top-flight care to patients on-scene and to advertise that they partner with world-class health-care systems. And it’s less expensive than hiring their own specialists. “That’s a proverbial triple win,” says Dr. Rasmussen.

Experts say more hospitals are likely to invest in telemedicine systems as they move away from fee-for-service payments and into managed-care-type contracts that give them a set fee to provide care for patients and allow them to keep any savings they achieve.

Is the state-by-state regulatory system outdated?

Historically, regulation of medicine has been left to individual states. But some industry members contend that having 50 different sets of rules, licensing fees and even definitions of “medical practice” makes less sense in the era of telemedicine and is hampering its growth.

Currently, doctors must have a valid license in the state where the patient is located to provide medical care, which means virtual-visit companies can match users only with locally licensed clinicians. It also causes administrative hassles for world-class medical centers that attract patients from across the country.

At the Mayo Clinic, doctors who treat out-of-state patients can follow up with them via phone, email or web chats when they return home, but they can only discuss the conditions they treated in person. “If the patient wants to talk about a new problem, the doctor has to be licensed in that state to discuss it. If not, the patient should talk to his primary-care physician about it,” says Steve Ommen, a cardiologist who runs Mayo’s Connected Care program.

To date, 17 states have joined a compact that will allow a doctor licensed in one member state to quickly obtain a license in another. While welcoming the move, some telemedicine proponents would prefer states to automatically honor one another’s licenses, as they do with drivers’ licenses. “You don’t have to stop a get a new license every time to drive through a new state,” says Jonathan Linkous, the American Telemedicine Association’s CEO.

But states aren’t likely to surrender control of medical practice, and most are considering new regulations. This year, more than 200 telemedicine-related bills have been introduced in 42 states, many regarding what services Medicaid will cover and whether payers should reimburse for remote patient monitoring as well as store-and-forward technologies (where patients and doctors send records, images and notes at different times) in addition to real-time phone or video interactions. “A lot of states are still trying to define telemedicine,” says Lisa Robbin, chief advocacy officer for the Federation of State Medical Boards.

What counts as practicing medicine?

The exploding volume of health information on the internet is raising new questions about what constitutes the practice of medicine. Some web-based businesses enable consumers to consult doctors overseas, who don’t have U.S. medical licenses, but post fine-print disclaimers that they are providing information and not medical advice.

FirstDerm invites users to upload photos and a description of their skin issues and says a “board-certified dermatologist” will reply within 24 hours with a possible identification of the condition and treatment options, for $25. Most of the dermatologists are in Europe.

CEO Alexander Börve says “there is no doctor-patient relationship” because both the physicians and patients remain anonymous.

Another site, First Opinion, connects users with doctors in India for web chats, but a disclaimer states that these are merely “social interactions.” If a prescription or lab test is warranted, a locally licensed doctor joins the conversation for a $39 fee. The company didn’t respond to requests for comment.

Are such services “practicing medicine” without a license? The exact definition varies from state to state, and state medical boards generally don’t investigate unless a patient files a formal complaint. Even then, boards have jurisdiction only over individual doctors licensed in their state, not companies, or physicians overseas, says Ms. Robbin of the Federation of State Medical Boards.

How will this change competition?

Telemedicine is also shaking up traditional relationships between providers and payers and fueling the rise of medical “megabrands” whose experts are increasingly competing for patients in each other’s backyards.

Insurers such as Anthem and UnitedHealth Group are offering their own direct-to-consumer virtual doctor-visit services, rather than simply paying for plan members to use those from web-based vendors. Major health systems are making their physicians available for virtual follow-ups and chronic-disease management, as well as urgent-care visits, to new and existing patients.

The Cleveland Clinic is working to create a “Cleveland Clinic in the Cloud” that would allow patients across the country to access its physicians without going to Ohio. Dr. Rasmussen also foresees joining with local pharmacy clinics, labs and imaging centers to provide in-person exams as needed. “This will open up a world of relationships across a spectrum of health-care providers that we haven’t seen to date,” he says.

Ms. Beck is a Wall Street Journal senior editor in New York. She can be reached at melinda.beck@wsj.com.